Looking for something else?

In addition to the books listed here, UE locals can purchase a variety of resources and UE gear from the National Union. Please email the National Office at ebony.thomas@ueunion.org

International Solidarity in Action, the 2022 e-book written by retired UE Director of International Affairs Robin Alexander, can be downloaded here.

A Peoples History of American Empire

Since its landmark publication in 1980, A People’s History of the United States has had six new editions, sold in excess of 1.7 million copies, became required classroom reading, and been turned into an acclaimed play.  Not merely a successful book, A People’s History triggered a revolution in the way history is told, displacing the official versions with their emphasis on great men in high places to chronicle events as they were lived, from the bottom up.

Now, Howard Zinn, cartoonist Mike Konopacki and historian Paul Buhle have collaborated to retell, in vibrant graphic detail, a most immediate and relevant chapter of A People’s History: the centuries-long story of America’s actions in the world.  Narrated by Zinn himself, this version opens with the events of 9/11 and then jumps back to explore the cycles of World War I, Vietnam, the Iranian revolution and Central America.  The book also follows Zinn’s own story, as the son of poor Jewish immigrants becomes one of America’s leading historians.

Shifting from world-shattering events to one family’s small revolutions, A People’s History of American Empire presents the classic ground-level history of America in a dazzling new form.

There are no reviews yet.

This site uses Akismet to reduce spam. Learn how your comment data is processed. 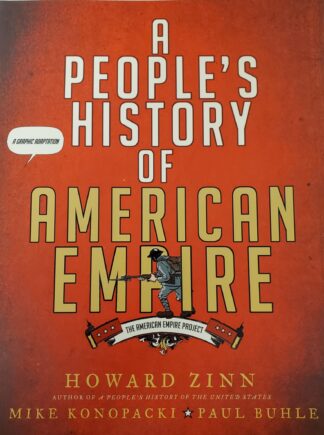 You're viewing: A Peoples History of American Empire $10.00
Add to cart